The Board of Commissioners Decree No. 011/KOM-MLPT/VI/2020 dated 30 June 2020 created a Nomination and Remuneration Committee following the guidelines stipulated under the principles of Good Corporate Governance.

The following members composed the Nomination and Remuneration Committee:

Dicky Setiadi Moechtar was appointed as Independent Commissioner of the Company by the decision of the Annual General Shareholders Meeting for the fiscal year 2019. His appointment was formalized in the Annual General Meeting of Shareholders Deed of Resolution No. 37, dated 30 April 2021, drafted before Tangerang-based Notary Buchari Hanafi, S.H. 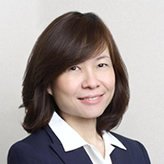 She began her career at Citibank Indonesia where she rose to become Global Consumer Business Human Resources Head, Senior Vice President from 1989 until 2013. In 2013, she joined Bank Mega as Human Capital Director and three years later, moved to Lippo Group of Companies as Senior HR Executive, a post she holds to this day.

A 55-year old Indonesian citizen, she holds a Bachelor of Science degree in Accounting from San Francisco State University, United States in 1988. Jeffrey Koes Wonsono has been Commissioner of the Company since 2013, and his service was extended based on the decision of the Annual General Shareholders Meeting for the fiscal year 2020. His reappointment was formalized in the Annual General Meeting of Shareholders Deed of Resolution No. 38, dated 30 April 2021, drafted before Tangerang-based Notary Buchari Hanafi, S.H.

In 1992, he joined the Lippo Group. He served as President Director of PT Multipolar Tbk from 1994 to 2010, and Commissioner since 2011-now. He was also Commissioner of PT Matahari Putra Prima from 1997 until 2013. Since 2019, he holds the post of President Commissioner of PT Visionet Data Internasional (VDI), PT Multifiling Mitra Indonesia, and PT Pacific Eastern Coconut Utama.

He is an Indonesian citizen, aged 61. He earned his Bachelor’s degree in Marketing from London’s Center for Business Studies in 1979 and Master’s degree in Business Administration with a major in Banking from San Francisco’s Golden Gate University in 1986.